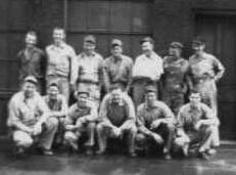 Earl Leonhardt started working for Brinkmeyer Plating in 1935.  William Brinkmeyer taught him the business.  In 1950, Earl borrowed $7,000 from a relative, signed a $2,000 note and $6,000 personal plating obligation to Mr. Brinkmeyer.  As a result, at age 34, Earl Leonhardt purchased the business and changed the name to Leonhardt Plating Company.

Please contact Leonhardt Plating Company to learn how our services will benefit you.

The company was located in an alley on Jessamine Street in Camp Washington.  The company had 14 employees including Earl’s wife, Mildred, doing the books at home and his father, Charlie, helping in the office.  The focus of the business was the growing machine tool industry, which flourished in the Mill Creek valley.

In 1960, the company moved to Elmore Street for more space.  The State of Ohio forced another move in 1966 when the land was bought to accommodate Interstate 74.

The company relocated to its current location which was originally a 12,000 square foot furniture warehouse that Earl transformed into plating, polishing and shipping areas.  In 1985 an 8,000 square foot addition was added to include a new office space and much needed shipping and receiving docks for a total of 20,000 square feet of production space.

Earl Leonhardt earned a reputation as an honest businessman and always maintained a good relationship within the metal finishing industry.  Dan, with over 40 years and Kerry, with over 30 years’ experience, have followed in that tradition.  A third generation, Scott, Joe, Kevin and Steve Leonhardt have been actively maintaining this tradition since 1986.